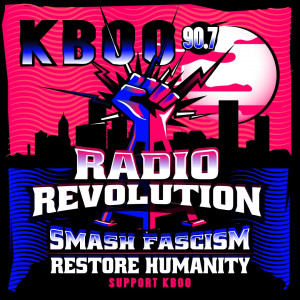 on the need for community radio!

Bill Resnick’s guest on today’s Old Mole is Norman Solomon, and it’s worth reflecting on the value of Solomon’s work in the current media landscape.

Solomon is a longtime associate of the media watch group Fairness & Accuracy In Reporting (FAIR),  which produces the radio show Counterspin, which you can hear on KBOO Every 1st, 2nd, 3rd and 5th Friday from 5:30 pm - 6:00 pm.

Solomon is also a founder and executive director of the Institute for Public Accuracy, which works to provide alternative sources for journalists.

Providing criticism of mainstream media and resources for mainstream journalists is hugely important, especially since media consolidation means there are few sources providing checks and balances on news.

By 2012, 90 % of all media in the US was owned by six corporations, down from 50 in 1983. That affects cultural as well as news offerings, so that, for instance, 80 percent of station music playlists matched.  So, you’d hear the same thing pretty much everywhere all the time—unless you were listening to community radio.

And because, as the Free Press notes,  the FCC further  slashed its media-ownership limits in 2017, corporations are now permitted to own the daily newspaper and multiple TV and radio stations in the same market — which gives people fewer voices and viewpoints, and far less local-news coverage.  Unless, of course, they have access to community radio.

It’s true that this consolidation of media ownership coexists with the rise of social media and a flood of content.

But that flood can itself be a problem, as writer and cultural critic Soraya Roberts comments in an essay posted on Longreads last month.

(quote) The web once made something of a biblical promise to give all of us a voice, but in the ensuing flood ... only a few bobbed to the top. With increased diversity, this hasn’t changed — there are more diverse voices, but the same ones float up each time. ...

[By ‘flooding,’ Roberts means]  the practice of unleashing a mass torrent of the same stories by the same storytellers at the same time, making it almost impossible for anyone but the same select few to rise to the surface.

Theoretically, the “democratization” that everyone continues to harp on about persists — anyone with internet access can produce content — but what’s not democratic is the dissemination. There are niche sites for any of your niche needs and niche corners of mainstream sites, sort of, but with these sites progressively dwindling and the ones left behind scrambling to secure their place, which is secured by clicks (still!?), they gravitate toward what’s trending. ...

In the cacophony of content and conversation around that content, the most familiar voices at the largest, fastest, trendiest outlets carry the farthest; according to SimilarWeb, which tracks website statistics, only five sites dominate around 50 percent of the ... newspaper traffic in the U.S. (endquote)

Writing in the  the Columbia Journalism Review last year, Ravi Somaiya points out that with “Every news outlet ... now plugged into the same streams — most notably, social media,”  -- online newspapers now respond to a borderless audience and a perpetual 24-hour news cycle.  Like news channels seeking clicks above all, they push twice as many stories as their paper ancestors, often with a much smaller staff.  Somaiya  suggests that

(quote) The net effect is to speed up and amplify the groupthink that has ... plagued journalists. And to deny audiences ... context.

Readers, inundated by streams of stories tailored for them, with similarly sharpened headlines ruthlessly tested to work on social media, develop a kind of fatigue....

Those who seek to confuse, dissemble and sow distrust . . . find fertile ground.

Faced with a sea of headlines, in every permutation, ... even the most determined mind rebels and begins to dismiss it all as noise.(endquote)

And Roberts argues that especially in the area of cultural productions,

Much of it is noise.

(quote) ...the projected utopia of infinite content has revealed itself  ... to be ... just an infinite reconfiguration of the same things over and over.

Indiewire critic David Ehrlich recently noted that since Jordan Peele’s Get Out shook the culture in 2017, only seven original movies (neither spin-offs, nor adaptations, nor remakes) have topped the box office, one of which was also by Peele.

We shift around the same ideas, and... the same people, creating an overrecognized few and an under recognized many.

(quote) establishing the terms of the cultural conversation has become increasingly automated ....

with the rise in algorithmic recommendations, there has been a ... decline in sales diversity: We are increasingly consuming the same books, the same movies, the same shows. In A Human’s Guide to Machine Intelligence, Kartik Hosanagar reports that a third of the product choices at Amazon are driven by algorithms, while at Netflix it’s at around 80 percent....

these algorithms are “taste-reflectors,” [meant to] reinforce your palate. (endquote)

Unfortunately,  while  that might be true for entertainment at Amazon and Netflix, on YouTube the algorithms drive viewers toward increasingly rightwing propaganda.  Alt-right youtubers build audience by exploiting the algorithms that respond to “engagement” without considering any evaluation of quality or accuracy.  And outrage is engaging.

“YouTube monetizes influence for everyone, regardless of how harmful their belief systems are. The platform, and its parent company, have allowed racist, misogynist, and harassing content to remain online”

Lewis identifies a network of academics, media pundits, and internet celebrities who “function as political influencers who adopt the techniques of brand influencers to build audiences and ‘sell’ them on far-right ideology.”

in a “deliberate attempt to radicalize users by pulling them into a vortex of reactionary content.”

When viewers engage with this content, it is framed as lighthearted, entertaining, rebellious, and fun. This fundamentally obscures the impact that issues have on vulnerable and underrepresented populations—the LGBTQ community, women, immigrants, and people of color. ...

social networking among right-wing influencers on YouTube “makes it easy for audience members to be incrementally exposed to, and come to trust, ever more extremist political positions,” Lewis writes.  And Google, of course, happily monetizes all of that engagement and traffic with ads.

Michael Niman, writing in Truthout, notes that the weaponizing of social media by fascist forces affects all of us.  Considering the 2016 elections, he points out that (quote)

while Russian interference was real and documented, its impact paled in comparison to the more effective propaganda campaigns launched by Breitbart and Fox.

During the 2016 election season, fraudulent sites and fascist posts got more Facebook reads than the top 19 news sites reporting verifiable reality put together.

So what can you do to oppose fascism and support accurate news, historical context, and the values of feminism, social justice, and left politics?  Support your Non-Commercial, Listener-Sponsored, Volunteer-Powered Community Radio station.

Update Required To play the media you will need to either update your browser to a recent version or update your Flash plugin.
Download audio file
Topic tags:
Media