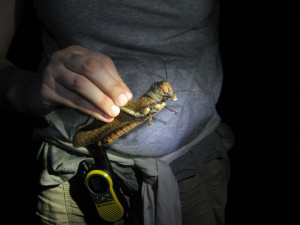 Tonight from 12:00-3:00 AM Bill McQuay of Ecolocation Sound and NPR will be guest hosting and presenting the final installment of his and researchers Drs. Laurel Symes and Hannah ter Hofstede's recent field recordings from Barro Colorado, Panama.

Thrill to the ultrasonic sounds of katydids and bats slowed to one-twentieth of their normal speed so we can perceive what the world sounds like to a tropical bat or bug.

Gape in wonder at the scientific progress in recording technology that allows us to also capture the sounds of tremulation, which is to say the insects vibrating elements in their environment to communicate privately betwixt their intimate fellows.

Marvel that the show creator managed to remember to promote this amazing episode after working 12-14 hours a day for a week in Ireland's HearSay Festival production office!

For those that went to OMSI After Dark last August or Hear and There: Audio Postcards from Earth in October THIS is what you've been waiting for! The non-commercially released two+ hours of trance-inducing, dreamy forest audio!

Thank you for this!

Thank you for this!