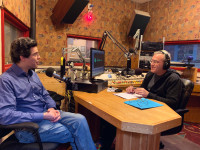 The Portland Youth Philharmonic is now in its 95th season as a beloved musical institution in our city. So it’s only fitting the orchestra has chosen to celebrate the 100th birthdays of two other treasured musical institutions – PYP’s former musical director Jacob Avshalomov and his friend and colleague, the famous American composer and conductor Leonard Bernstein.

PYP will be performing Bernstein’s "Jeremiah Symphony" and Avshalomov’s tone poem “The Taking of T’ung Kuan” on Saturday, March 2nd at the Arlene Schnitzer Concert Hall. And they’ll be giving a free preview performance tonight at 7:30, at Pacific University’s Taylor-Meade Performing Arts Center.

We’re fortunate to have PYP’s current musical director, David Hattner, with us now to talk about these special anniversary concerts.

Update Required To play the media you will need to either update your browser to a recent version or update your Flash plugin.
Download audio file
Topic tags:
Arts/Culture, Faith/Religion/Spirituality, Music, Youth
Genre(s):
Arts and Culture, Live Performance, Spiritual