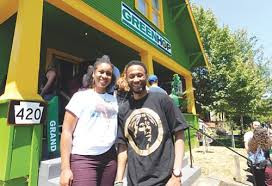 Join us as Effable Radio and Oba broadcast from Green Hop!

Green Hop is a recreational cannabis dispensary featuring a new, exciting twist on the retail experience.

The 1st Historical Hip Hop dispensary in the world that offers an Art and Digital technology experience.

Green Hop is a link between musicians, art, and cannabis!

Hip hop and cannabis have been intertwined since the genre rose up from its roots in the streets of the 1970s. DJ Kool Herc laid the foundation, Grandmaster Flash created the technique, and Afrika Bambaataa organized to help birth a culture called Hip Hop.

Commercially, the Sugar Hill Gang paved the way for Run D.M.C., then groups like N.W.A. in the late 80s. When Dr. Dre released his debut solo album, The Chronic, in 1992, it featured the unapologetic weed-smoking Snoop Doggy Dog, and hip hop and cannabis have been fused ever since.