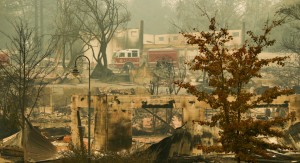 The wildfires in Northern and Southern California this month are a grisly foreshadowing of a world in the fiery grip of climate chaos. It is apparent - unless you're a climate denier - that climate change is upon us and that fire seasons without end are a stark indication of how much human activity and fossil fuels have intensified wildfire regimes as well as catastrophic weather events.

On this episode we talk with fire and forest ecologist Dominick DellaSala, with the Geos Institute in Ashland, Oregon, about what we need to be learning from California’s escalating problems with destructive wildfires, driven by a warming, drying climate, and a massive expansion of housing in the wildland–urban interface.

Dominick DellaSala is President and Chief Scientist of the Geos Institute in Ashland, Oregon. He is an internationally renowned author of over 200 technical papers on forest and fire ecology, conservation biology, endangered species management, and landscape ecology and has appeared in National Geographic, Science Digest, Science Magazine, Scientific American, Time Magazine, Audubon Magazine, National Wildlife Magazine, High Country News, Terrain Magazine, NY Times, LA Times, USA Today, Jim Lehrer News Hour, CNN, MSNBC, “Living on Earth (NPR),” several PBS documentaries and even Fox News! Dominick co-founded the Geos Institute in July 2006 and he currently maintains a provocative conservation science blog and wildfire blog. He is motivated by his work to leave a living planet for his daughter and all those that follow.

Update Required To play the media you will need to either update your browser to a recent version or update your Flash plugin.
Download audio file
Topic tags:
Environment/Climate