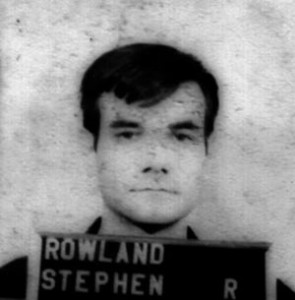 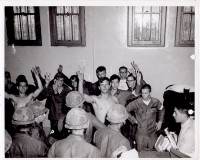 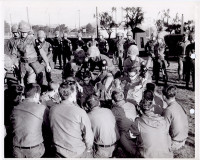 Marvin is joined by fellow Vietnam veteran Randy Rowland with his story of GI's leading the sitdown protest known as The Presidio Mutiny.

A personal account by a participant of the Presidio mutiny, a sitdown protest of soldiers in military prison against the killing of an inmate during the Vietnam war. 27 mutineers then faced the death penalty, which triggered national outrage. The San Francisco newspaper merely reported that a prisoner at the Presidio Stockade had been shot and killed by a guard:

"It was Friday, October 11th, 1968. Knowing that I would most likely end up in the stockade the next day, I was asked to investigate what was going on inside, and report it to the anti-war movement. Saturday a massive demonstration was to be held in San Francisco: "GIs and Vets march for peace." 10,000 or more people would march in the demo. Four of us, AWOL from the military, were to turn ourselves in to military authorities at the end of the march. The Brass, worried about the growing GI anti-war movement, tried to prevent active duty GIs from going to the demo through harassment and blatantly restricting whole units to base for the weekend. In spite of this, many GIs and vets marched in the demonstration. Afterwards there was a small ceremony at the gates to the Presidio Army Base and I stepped over the line, into the custody of the awaiting MPs. I had been on orders to go to Vietnam (a common unofficial punishment for having applied for noncombatant status). On the advice of my lawyer, I had gone AWOL to avoid shipment. I hadn't been on a military base in over 3 months. I was nervous-word on the street was that there was a lot of brutality going on in the stockade. Much to my surprise, the military authorities decided to put me in a holding company instead of confining me in the stockade. By now it was early evening, and I tried to think of how to deal with this unexpected development. I couldn't find out what was going on in the stockade if I wasn't in it. The Sergeant on duty in the orderly room was the kind of guy all the jokes about military mentality are based on. I walked in and announced "I'm refusing to sweep this floor on grounds of conscience!" It didn't occur to the Sarge that nobody had asked me to do anything. He immediately found a broom and thrust it in my face growling, "I'm giving you an order to sweep this floor, and I don't want lip, just assholes and elbows." I wouldn't take the broom. His face was a study in self-righteous determination as he handcuffed me to a chair. Half hour later, I found myself in the Presidio Stockade. It didn't take long to hear the story of how the guard had shotgunned a prisoner at close range, how there had been a riot on Friday night in response to the murder. The prisoners were angry, and wanted to escalate the struggle. I found Keith Mather, one of the "Nine for Peace," GIs who had chained themselves to clergymen in a San Francisco church in protest to the war. He and I and a few others started going around talking to prisoners calling for a meeting later at night in the cellblock. People debated the options hotly and finally agreed on a sitdown demonstration in the stockade yard on Monday morning. We drew up a list of demands, including investigations into the murder of the prisoner, protests against stockade conditions, opposition to the war and racist harassment of Blacks. I passed a copy of the list to my lawyer Sunday morning and reported back that he would set up support on the outside. We spent the rest of the weekend debating each other and the rest of the prisoners about why it was important to do the action, how important it was to connect with the civilian movement, and what the likely consequences of our protest would be....."