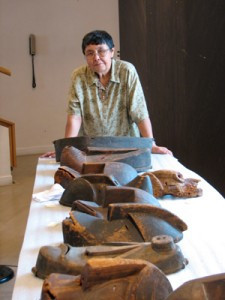 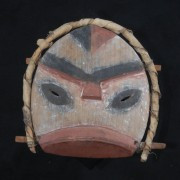 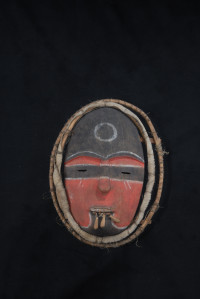 A documentary about the historic return of Indigenous masks

Dmae Roberts presents and encore edition of the half-hour version of Coming Home: Return of the Alutiiq Masks, originally a one-hour radio documentary that interweaves oral history interviews, Alutiiq music and soundscapes.This full-length documentary originally aired in 2008 on about 188 public radio stations around the country.

Coming Home: Return of the Alutiiq Masks takes us to Kodiak, Alaska where Alutiiq peoples work to save their language, cultural traditions and heritage by unlocking the secrets of the masks collected by French explorer Alphonse Pinnart in 1872.

When Pinnart died in 1911, he bequeathed the masks to the Chateau Musee, a small museum off the coast of Northern France. The collection survived two World Wars and were “rediscovered” by Alutiiq artists who began making pilgrimages to France in 2000 to see the artifacts of their culture. This led to an unprecedented sharing of history between theAlutiiq Museum in Kodiak and the Chateau Musee.

Dmae Roberts as part of a USA Fellowship residency produced this documentary in collaboration with Earthsongs/Koahnic Broadcasting in Anchorage.  Host is  Shyanne Beatty and Associate Producer/Engineer is  Clark Salisbury.

136 years ago…
Alutiiq masks were taken
From Kodiak, Alaska
And given to France
And for a short time they are…

“Where I go, you go, helper spirit.
You don’t know where I will come from,
The land or sea.
As I travel the universe, helper spirit,
Protect me…”

-From a song collected by Alphonse Pinart
in Eagle Harbor, March 1872

You can hear Stage & Studio at the KBOO website or on 90.7FM live at 11am Tuesdays.

Or you can subscribe to the podcast on iTunes so you don’t have to miss a show.
And don't forget to check out the official Stage and Studio website.

To purchase a download of the entire one-hour series, write to stagenstudio @ aol.com

National Endowment for the Arts

Update Required To play the media you will need to either update your browser to a recent version or update your Flash plugin.
Download audio file
Topic tags:
Arts/Culture, Indigenous
Genre(s):
Arts and Culture