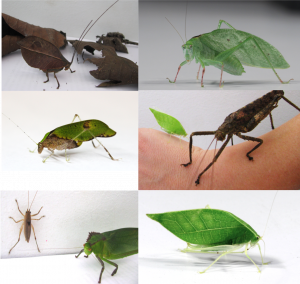 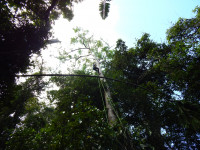 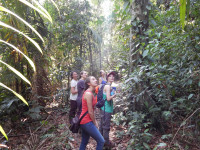 In Pursuit of Science and Sound:

A Cornell Lab of Ornithology Edward W. Rose Postdoctoral Fellow will be the subject of a three-part series on KBOO radio while the sounds, which are the focus of that research, are featured in a unique surround sound event at the Oregon Museum of Science and Industry (OMSI).

Beginning September 29 The research of Cornell Lab of Ornithology Rose Fellow, Laurel Symes will be the subject of a series of broadcasts on KBOO radio.

[Archives of this show and transcripts will be featured here on the Threshold Shift program page].

The study of in situ behavior of Neotropical forest katydids in response to bat echolocation calls, begun while Dr. Symes was a Neukom Fellow at Dartmouth College, is now a component of Dr. Symes pursuits as a Rose Fellow at the Cornell Lab of Ornithology. That research focuses on understanding how communication and decision-making is shaped by ecology and evolution.

The ultrasonic soundscapes recorded for that research are a key part of a unique collaboration between OMSI, its’s Kendal Planetarium and KBOO community radio, and Portland-based producer, Nicole Martin of Echo Collector Events, featuring 5.1 surround soundscapes from around the globe accompanied by night skies of the soundscape locations.

The coordination of the radio series and surround sound planetarium event is a first of its kind effort to bring the adventure and excitement of scientific discovery before the general public.

You'll hear it first, folks! Yet another reason to support your awesome community radio station, KBOO 90.7 FM, going in depth for science and on environmental issues when others cannot. Come join us at OMSI on October 9th! Tickets are $17 for KBOO and OMSI members.--Much love, Nikki Martin