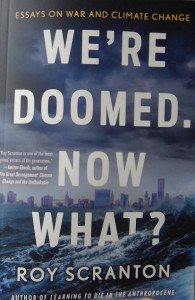 We live in a world of unprecedented change -- rising temperatures and extreme weather are becoming the norm, as are mass extinctions, resource depletions and record numbers of refugees and homeless. Outsized wealth disparities, fossil fuel addiction, a "war on terror" and clashing world views seem entrenched. In his most recent book, We're Doomed. Now What?, writer Roy Scranton takes a hard look at where we are and where we are going, and ask us to do the same. What do these times demand of us? How can we re-vision society?  How do we recover our humanity?

“Roy Scranton lucidly articulates the depth of the climate crisis with an honesty that is all too rare, then calls for a reimagined humanism that will help us meet our stormy future with as much decency as we can muster . . . This is a wise and important challenge from an elegant writer and original thinker.”       —Naomi Klein, author of This Changes Everything: Capitalism vs. the Climate

Roy Scranton is an American writer of fiction, non-fiction and poetry. Besides We're Doomed. Now What? Essays on War and Climate Change, he is author of  Learning to Die in the Anthropocene and the novel novel War Porn. He co-edited Fire and Forget: Short Stories from the Long War. Scranton grew up in Oregon, dropped out of college and spent several years wandering the American West. He enlisted in the army in 2002 and was discharged in 2006, after having served 14 months in Iraq. Finally able to pay for college, he earned a Bachelor's and Master's degree at The New School and a PhD at Princeton University. He currently teaches at the University of Notre Dame.

Thursday, July 26, at 7:30 pm, Roy Scranton will be at Powell's on Hawthorne, 3723 SE Hawthorne Blvd. to discuss We're Doomed. Now What? Scranton will be joined in conversation by Omar El Akkad, author of American War.

Update Required To play the media you will need to either update your browser to a recent version or update your Flash plugin.
Download audio file
Topic tags:
Environment/Climate, War/Peace