Paul Levy on The Quantum Revelation: A Radical Synthesis of Science and Spirituality 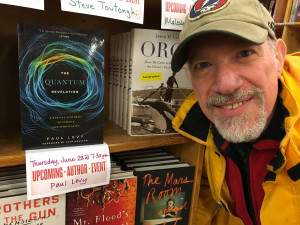 Written for readers with no physics background, Paul Levy’s latest book, The Quantum Revelation is for those who have heard that quantum physics amazing but don’t quite understand how or why. Levy contemplates the deeper philosophical underpinnings of quantum physics, exploring the fundamental questions it provokes: What does it mean that quantum theory has discovered that there is no such thing as “objective reality?” How are we participating—via our consciousness—in creating our experience of a reality that quantum theory itself describes as “dreamlike?” What are the implications for us in our day-to-day lives?

"In The Quantum Revelation, Paul Levy brilliantly elucidates the reality that separation does not exist on any level and that humanity’s principal task in the throes of the global crisis is to deeply reconnect with oneself, with each other, and with Earth." ...Carolyn Baker, Ph.D., Author of Dark Gold: The Human Shadow and The Global Crisis

Paul Levy is a spiritual philosopher, author, teacher, and healer. His books include Awakened by Darkness: When Evil Becomes Your Father, Dispelling Wetiko: Breaking the Curse of Evil and The Madness of George W. Bush: A Reflection of Our Collective Psychosis. He is the founder of the “Awakening in the Dream Community” in Portland, Oregon. An artist, he is deeply steeped in the work of C. G. Jung, and has been a Tibetan Buddhist practitioner for over thirty years. He is the coordinator for the Portland PadmaSambhava Buddhist Center. Find out more at  paul@awakeninthedream.com .

Paul Levy will be at Powell's City of Books, Thursday, July 28, 7:30 pm, 1005 NW Burnside, for the book release of The Quantum Revelation.

Update Required To play the media you will need to either update your browser to a recent version or update your Flash plugin.
Download audio file
Topic tags:
Science/Technology, Faith/Religion/Spirituality