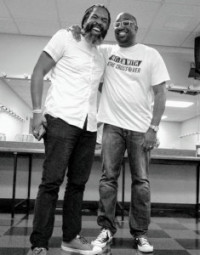 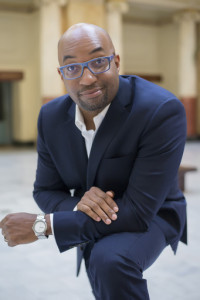 We reprise Emma Jackson Ford’s May, 2018 interview with poet Kwame Alexander and his musical accompanist, guitarist Randy Preston.  The interview focusses on Rebound, the follow-up to his Newbery medal-winning middle-grade novel, The Crossover.

Alexander is a poet, educator, and the New York Times Bestselling author of 25 books, including, his two 2020 releases, Light for the World to See:  A Thousand Words on Race and Hope and Becoming Muhammad Ali, co-authored with James Patterson.

The poet-in-residence to NPR's “Morning Edition,” Alexander is the recipient of several awards, including the Coretta Scott King Author Honor, the Lee Bennett Hopkins Poetry Prize, three NAACP Image Award nominations, the NCTE Charlotte Huck Honor, and the 2017 Inaugural Pat Conroy Legacy Award. He believes that poetry can change the world, and he uses it to inspire and empower young people around the world through his Writing Workshop. He's led cultural exchange delegations to Brazil, Italy, Singapore, and to Ghana, where he is training teachers and building a library and health clinic, as a part of LEAP for Ghana, an International literacy program he co-founded. The 2018 NEA Read Across America Ambassador, Kwame is also the host and producer of the literary variety/talk show, Bookish, which airs on Facebook Watch, and the Founding Editor of VERSIFY, an imprint of Houghton Mifflin Harcourt Books for Young Readers.