How To Fix the Future: Andrew Keen 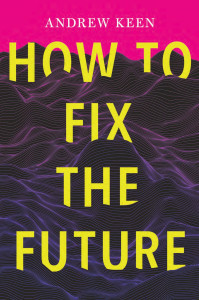 Staying Human in the Digital Age

Stephanie Potter welcomes author Andrew Keen to KBOO's Spring Membership Drive to discuss his book How To Fix The Future.  Call in during the show to pledge your support and get a copy the book.

Former Internet entrepreneur Andrew Keen was among the earliest to write about the dangers that the Internet poses to our culture and society. His 2007 book The Cult of the Amateur was critical in helping advance the conversation around the Internet, which has now morphed from a tool providing efficiencies and opportunities for consumers and business to an elemental force that is profoundly reshaping our societies and our world.  In his new book, How to Fix the Future, Keen focuses on what we can do about this seemingly intractable situation.

With his new book, Keen switches from sarcasm to a kind of pragmatic optimism. Our digital future can be shaped in more humane directions, he argues. But for that to happen we need to be realistic about the scale of the challenge, to learn from history and accept that there are no magic bullets or technological fixes. Like Churchill, he offers mostly blood, sweat and tears; but at least he has a programme of what needs to be done.

A key plank in this platform is that the dominant digital technologies of the future must not be proprietary, but open. And there must be real competition in digital markets. This means that governments have to update antitrust laws for a digital age in which winner-takes-all outcomes are routine, and enforce them rigorously. Monopolistic abuses should be prosecuted and punished. Mergers and acquisitions that were once waved through (Google’s acquisition of DoubleClick, for example, or Facebook’s of WhatsApp) should be scrutinised sceptically. Competition lawyers should be crawling all over the hidden, high-speed ad-trading markets operated by Google and Facebook. And so on.

Second, we need to protect the public sphere on which all democracies depend. Facebook and Twitter – and, in some areas, Google – should be treated and regulated like the media companies they have become. The era when we were suspicious of Rupert Murdoch but indulgent towards Mark Zuckerberg is over. Tech companies should be held responsible for the harms they do.