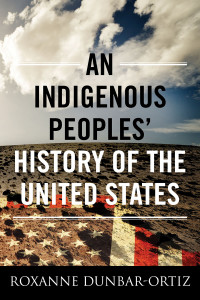 The history of the U.S. is one of settler colonialism. The state was established on the basis of white male supremacy, slavery, land theft and genocide. “From sea to shining sea” the Native nations were decimated and dispossessed. The survivors herded into concentration camps. It was God’s will. The genocidal policy reached its peak under President Andrew Jackson. Its ruthlessness was best articulated by Army general Thomas Jesup, who, in 1836, wrote: “The country can be rid of them only by exterminating them.” Native people are still here. Today, there is growing support for their movements such as the campaign to abolish Columbus Day and replace it with Indigenous Peoples’ Day. The Dakota Access Pipeline resistance led by the Standing Rock Sioux was joined by many non-Native allies. The action, though unsuccessful, captured the imagination of people everywhere. The struggle for indigenous rights continues.

Roxanne Dunbar-Ortiz grew up in rural Oklahoma, the daughter of a tenant farmer and part-Indian mother. She has been active in the indigenous movement for more than four decades and is known for her commitment to social justice issues. She is an award-winning scholar and author of such books as An Indigenous Peoples’ History of the United States, All the Real Indians Died Off and Loaded: A Disarming History of the Second Amendment. She is the recipient of the Cultural Freedom Prize for Lifetime Achievement from the Lannan Foundation.