Family of Quanice Hayes and Supporters Rally Outside East Precinct 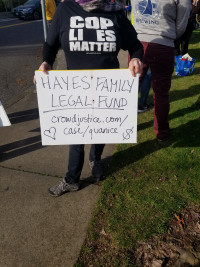 The family of Quanice Hayes recently announced that they will be suing the city of Portland, as well as the police officers involved in shooting Quanice just over a year ago, on February 9, 2017.

The Hayes family has also been active at the grassroots level over the last year, and held multiple events over the anniversary weekend.

KBOO reporter Sam Bouman attended a protest in East Portland on Saturday, and has this report.