Attack of Fracked Gas in the Northwest 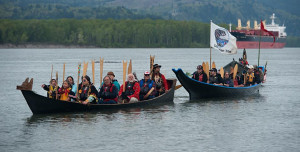 Now that Northwest communities have turned back nearly every coal and oil project proposed for the region, the "natural" gas industry is upping its ante in the Northwest. Actually before massive oil and coal export terminals began to threaten Oregon and Washington, Liquid Natural Gas (LNG) import facilities were proposed in Coos Bay and near Astoria, Oregon. These subsequently morphed into export facilities and started drawing intense opposition from across the state. The Astoria projects have been stopped, but the Coos Bay project continues to rear its head. Now another LNG facility in Tacoma is being built without all its necessary permits in place, despite opposition from local residents and the Puyallup Tribe. And a new player - methanol - has come to town as well.

On this episode of Locus Focus we talk with Longview, WA community activist Diane Dick about the world's largest methanol refinery being proposed for Kalama, WA - 9 miles south of Longview - and the growing opposition it has sparked. But first we talk about LNG.

Grassroots resistance to the Kalama Methanol Refinery had a major win last fall. A Washington State hearings board overturned the permits and the environmental review that had been previously issued for the methanol refinery proposal. Now, we must use this second chance by amassing large numbers of comments for the new Environmental Impact Study. The comment period is now open through March 1st. Please join us to learn how your comments can effectively carry extra weight to stopping the World's Largest Proposed Methanol Refinery.