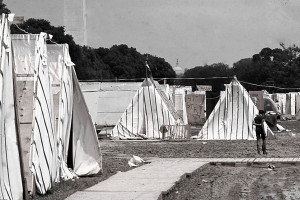 This coming Monday, February 5th, a number of Oregonians will deliver a letter to the state capitol in Salem, as part of the nationwide Poor People’s Campaign. The campaign describes itself as "A National Call for Moral Revival," and is inspired by, though far from an exact copy of, the Poor People’s Campaign initiated by Rev. Dr. Martin Luther King, Jr., five months before his death in 1968.

For more on the movement, KBOO reporter Sam Bouman spoke with one of the leaders who will be delivering the letter to the state capitol. Reverend E. D. Mondaine is pastor of the Celebration Tabernacle in Portland, first vice president of the local chapter of the NAACP, and owner of Po' Shines Café De La Soul in Kenton.