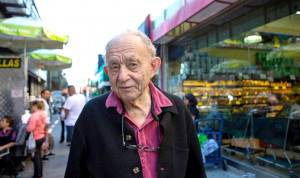 Frederick Wiseman is one of the pioneers of the documentary film movement known as Direct Cinema. Gina Leibrecht is continuing the tradition.

In the early 1960's a revolution in documentary filmmaking took root, inspired by both cultural uprisings and new audio-visual technologies.  The movement known as Direct Cinema rejected authorial voiceovers and other narrative devices, opting instead for immediacy, ambiguity, and intimacy.

Frederick Wiseman is a master documentarian whose controversial first feature Titicut Follies came into being almost by accident.  Half a century later, he's still directing films, including the recent profile of the New York Public Library, Ex Libris.  Jenn Chavez spoke with Wiseman during his 2016 visit to Portland.

Two contemporaries of Frederick Wiseman were the late Richard Leacock and Les Blank, partner of Gina Leibrecht.  S.W. Conser talks with Leibrecht about her documentary How To Smell a Rose, which captures the deep friendship and professional collaborations between these two media innovators.

We also hope that you'll enjoy Part One of our Direct Cinema series, featuring D.A. Pennebaker, Chris Hegedus, and Albert Maysles.  The audio for that episode can be found at this link.

And if you're interested in hearing an extended version of Jenn's interview with Frederick Wiseman, click on this link.