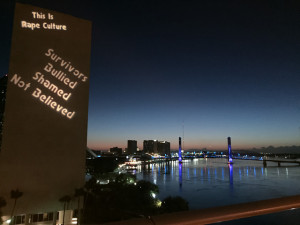 For generations of western binary gender role socialization, boys have been trained to be sexually aggressive and to equate sex with power, while girls have been trained to reject sex, or at least not enjoy it much. As the familiar double standard dictated, in most of 20th century America, a young man gained a reputation of wordliness, and manliness from first having sex-- or sowing his oats, as it were, while young women risked being branded a slut, or whore-  damaged goods, who would never be able to get a decent man to marry her (read this, take care of, protect, and govern her).

This paradigm started to crack in the late 60s, with the sexual revolution-  when suddenly, women were supposed to like sex.  Of course, women still risked being labled sluts, and whores- still got a "bad reputation",  but if you did decline sex, women risked being branded prudes, or having hang-ups. Along with this, second wave feminism resulted in some loud questioning of those gender norms, as did the movements for queer liberation. Join Ani and Lyn for a discussion about what the Me Too moment says about the pervasiveness of rape culture, and how it effects us all.  Me Too is shining a very bright light into places that were supposed to stay hidden; rape culture flourishes in the dark.

Update Required To play the media you will need to either update your browser to a recent version or update your Flash plugin.
Topic tags:
Gender, LGBTQ, Women