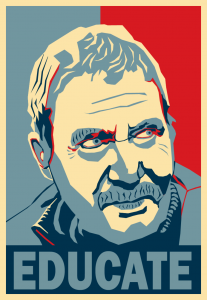 The murder of President John F. Kennedy on November 22, 1963 is the most discussed, scrutinized and written about assassination in history. The official narrative is that Lee Harvey Oswald acted alone in Dallas and that there was "no evidence of any conspiracy, domestic or foreign." That was the conclusion of the Warren Commission in 1964. However, fifteen years later the House Select Committee on Assassinations said there was a "high probability that two gunmen fired at President Kennedy" and “that he was probably assassinated as a result of a conspiracy.” Information relating to the assassination held in secret at the National Archives was released on Oct. 26, 2017. Curiously, some documents were held back because of “national security” concerns. More than 60% of Americans do not believe the government’s version of what happened. Questions about JFK’s death won’t and may never go away.

Michael Parenti is a brilliant orator and one of this country's foremost independent political analysts. He has taught at major colleges and universities in the U.S. and abroad. He is the author of numerous books including Democracy for the Few, The Face of Imperialism and The Assassination of Julius Caesar.