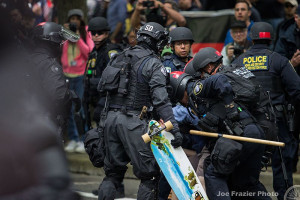 The Compliance Officer and Community Liaison (COCL) is the body tasked with independently assessing the city's compliance with a 2012 Settlement with the US Department of Justice. The settlement (pdf) was reached after years of community agitation over excessive force by police against people in the midst of mental health crises. The COCL is comprised of the Chicago-based firm Rosenbaum and Associates, which has done similar work with police departments around the country. There used to be a complementary oversight body comprised of community members--the ill-fated COAB (Community Oversight Advisory Board), which has been defunct since early this year. Here is a KBOO piece from 2016 detailing many of the issues with the COAB.

The COCL released a report on October 2 to little fanfare, officially titled the "Draft Compliance and Outcomes Assessment Report," which is a settlement-mandated check-in with how the Bureau is implementing the terms of the agreement. The report is not available on the city's website, and is buried deep in the Library section of the COCL website. You can find a direct link to it here.

It is more critical than previous reports. It finds adequate compliance within the Bureau's policy language, but finds that in certain areas the Bureau's training and supervisor reviews of officer behavior do not reflect the spirit of that language. For example, the term "de-escalation" is understood by the COCL and most literature on the subject to mean an avoidance of the need for force by taking into account the "totality of circumstances" in an interaction between an officer and a citizen. The officer should, in other words, approach the interaction with empathy and an eye for the citizen's situation. However, the COCL found that many officers do not consider de-escalation until force is already imminent. This results in situations where an officer will approach a subject who is clearly agitated, behave in a confrontational manner, escalate the situation, and wind up in a situation where force is deemed necessary and appriopriate. Their supervisor will then review the encounter with an eye to the "moment of force," not the "totality of circumstances," and see nothing wrong with the officer's behavior. This dual understanding of de-escalation is discussed multiple times in the report, for example on page 18.

Last night, Monday 10/16/17, there was a sparsely-attended town hall at the Portland Building where the COCL members presented their findings to a crowd that topped out at eighteen people, perhaps twelve of whom were community members from Portland Copwatch, the Albina Ministerial Alliance, and the Portland Chapter of the NAACP.

KBOO reporters Sam Bouman and Jasmin Moneymaker were there. Jasmin has this report.

Stay tuned throughout the week for more detailed looks into the report.

Public comment is open through November 3--you can send your comments to rosenbaumandassociatesllp@gmail.com.