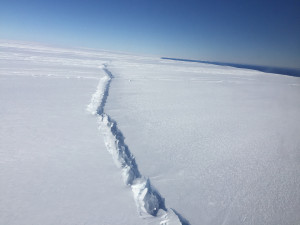 An iceberg three times the size of Manhattan broke off the Pine Island Glacier in western Antarctica and is now drifting out into the open ocean. The iceberg is about 71 square miles, and is the second largest iceberg to ever break off the continent. The glacier has already been losing ice at an increasing rate for the past 40 years, but chunks this size are rare. It's also kind of odd that the ice berg broke from the center instead of from the side. This could possibly be because of the warmer water under the ice eating away from beneath. If similar situations like this keep happening, the ocean's water will rise. The Pine Island Glacier on its own would raise sea levels nearly 1.7 feet if it all melted.

The Oregon Parks and Recreation Department announced on Monday that four park areas closed because of the Eagle Creek fire in the gorge have re-opened, though many other parks remain closed. It's been nearly three weeks since the fire caused the department to close the roads and rec areas. Today it announced the reopening of the Rooster Rock State Park, the Portland Women's Forum Viewpoint, Starvation Creek State Park and the Dabney recreation area. The department also announced that all major and historic structures on state park land withstood the fire, along with structures like the Multnomah Falls Lodge which firefighters had previously saved from the flames. The other state parks in the gorge will remain closed until staff are allowed to inspect them. Even so, the parks may see longer closures depending on the damage.

Enbridge's new Line 3 oil pipeline is coming to northern Minnesota, unless activists were to derail the project. Today and onwards to tonight, the Minnesota Public Utilities Commission is holding the first in a series of public hearings on whether or not to allow the crude oil pipeline to cross northern Minnesota. The state's Department of Commerce had previously given Calgary, Canada-based Enbridge a setback earlier in this month, which was an analysis released on September 11th condemning the Line 3 replacement project. Enbridge has already begun construction on a 14-mile segment of the pipe in superior on the Minnesota-Wisconsin border. The Department of Commerce represents the public interest in matters before the state PUC. The Minnesota PUC has until April next year to decide on whether to grant a 'certificate of need' to the pipeline.