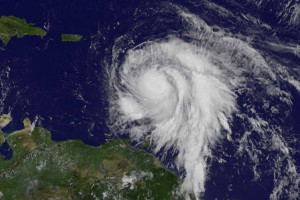 Weather forecasters are running out of ways to describe Maria as it may exceed even Harvey in its damage and strength. Hurricane Maria had made landfall Wednesday morning with 155 mile per hour winds and intense rains, just after Irma had caused nearly one billion dollars in damage. Hurricane Maria's first target was Dominica, but also hitting Puerto Rico hard. Throughout the islands, all of the people's power has been cut. Nearly over a million people had already lost their electricity because of Irma. Scientists say that because waters have warmed by nearly three degrees over the past century, hurricanes and have become larger and stronger, and sea levels have risen much more and caused many more storm surges and higher levels of flooding. Maria's projected path lands it aiming itself at the Turks and Caicos Islands. It is expected to stay in the Atlantic Ocean east of the U.S. as it travels northward. The last time this area experienced two major hurricanes in the same season was 1899, but not it has had three in the same month.

Attorney General Jeff Sessions has visited Portland on Tuesday, and called sanctuary cities much like our own places that "undermine the moral authority of the law." Sessions urged local police officials to reconsider their policies on non-cooperation with federal immigration agents. He has accused Portland and other cities of suing the Trump administration "so that they can keep receiving taxpayer-funded grants while continuing to impede federal immigration enforcement." Mayor Ted Wheeler has responded to Sessions in a letter (since he couldn't be present during the presentation) that Portland celebrates diversity in their local laws, and that "we are better for it." Though Sessions has encouraged Portland's leaders to change their policies, he was not to meet with any of them.

Interior Secretary Ryan Zinke has recently recommended to President Trump that he modify 10 national monuments created by his recent predecessors. These sites include shrinking four western sites, including our own Cascade-Siskiyou. The report that was leaked to The Washington Post says that "It appears that certain monuments were designated to prevent economic activity such as grazing, mining and timber production rather than to protect specific objects." The White House has yet to reach a conclusion on this recommendation. A National Geographic explorer in residence near one of the sites to me modified or shrunk named Enric Sala says that any sort of effort to restart commercial fishing within the monument's boundaries would "not only harm the ecosystem the monument is supposed to protect, but also its ability to help replenish tuna fisheries around it."