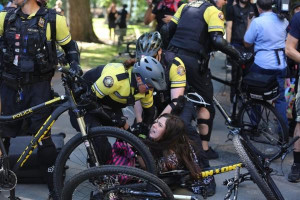 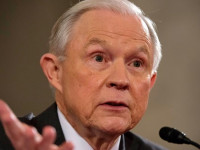 A Portland police officer has, last week on September 10th, thrown a 'distraction grenade' directly at a documentary filmmaker, before it exploded on the ground. The device, as the police called it, was a 'rubber ball distraction device' which is similar to a flash-bang grenade. A video filmed by the documenary filmmaker (now named Paul Kachris-Newman), appeared to show the officer throwing the device underhand directly at the cameraman, who was barely five to ten feet away. Kachris-Newman says that he was only at the rally to gather footage, and he was not a protester. He says that he always tries to remain mindful of a safe distance, going on to say that if he would be told to move at all, he would. Portland Mayor and Police Bureau Commissioner Ted Wheeler spoke to OPB saying that he supports the actions of officers, but added that police can always strive to do better.

In response to the recent North Korean missile launch, it has been reported that South Korea launched their own ballistic missile while the North Korean missile was still in flight. Russia and China have reiterated their opinion that military means would only lead to global disaster. Those two countries who share a border with North Korea, held joint war games in the Sea of Japan near the North Korean waters. The UN Security Council is expected to meet Monday to discuss imposing even more economic sanctions on North Korea. In response, North Korea has stated that the sanctions will only increase their desire to complete development of a deliverable nuclear weapon.

A protest has been planned for the arrival of Attorney General Jeff Sessions, who is coming to Portland on Tuesday. Already, a number of organizations (which include Voz Hispana Cambio Comunitario and Portland's Resistance) have begun planning the protest. More than 150 people have already said they would show up. The US Department of Justice has just announced that Sessions will be speaking at 1 pm a the local United States Citizenship and Immigration Services field office, which is at 1455 Northwest Overton. He is to give "remarks to federal law enforcement authorities about sanctuary cities," according to the US Department of Justice's release. The protest is to take place on September 19th, a Tuesday at 11 am to 2 pm at the same address.

Update Required To play the media you will need to either update your browser to a recent version or update your Flash plugin.
Download audio file
Topic tags:
Government/Politics, Law/Court/Crime, Police, Evening News, Energy/Natural Resources