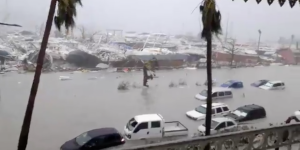 Hurricane Irma hit the islands of Barbuda and Antigua this morning as the most powerful Category 5 hurricane ever recorded in the Atlantic Ocean. It has exceeded the maximum theoretical strength for a hurricane in its environment based on water temperature and other current conditions. A state of emergency has been announced for the US Virgin Islands, Puerto Rico and Florida. The storm's path is unpredictable, but it is expected to his Puerto Rico this afternoon and move past the Dominican Republic and nearby regions hittnig south Florida this Sunday.

A suicide attack occured this Wednesday, wounding a US citizen at the Bagram Air Base in northern Afghanistan. The suspect rode on a motorcycle and detonated his explosives at the main entrance. The suspected attacker was thought to be from the Taliban, retaliating against the US dropping leaflets depicting very offensive images on Tuesday in northern Afghanistan. Major General James Linder has since apologized for the mistake, saying they have the deepest respect for Islam and their Muslim partners worldwide.

So far during the Eagle Creek fire, nobody has been injured and only one home and four outbuildings have been destroyed. The firefighter's main priority right now is to protect homes, historic structures and the Bull Run Watershed. The air quality throughout the state is still poor and residents are advised to avoid strenuous work and exercises outdoors.