Hurricane Irma Predicted to Go North, Up the East Coast 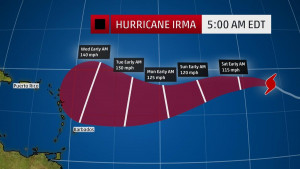 Hurricanes have recently been pounding the East Coast. Harvey has already destroyed countless lives, literally and figuratively. Recently however, NOAA has taken note of a newly formed hurricane that is already a dangerous Category 3 out in the Atlantic. They predict that it will keep rising in power, even possibly going to a Category 4. Though the progress of this Hurricane (now named Irma) is very slow, it can still be dangerous. It's current location is a little east of the Leeward Islands in the Northeastern Caribbean, and is predicted to north go along the eastern coast. Hurricane Irma may (but still unlikely) also affect the areas already hurt by Harvey's storms (including Houston). That's if Irma lasts that long, but many people are planning to keep an eye on Irma to see if something changes.

Recently, the U.S. Secretary of Education Betsy DeVos has notified Oregon Govenor Kate Brown of her approval for their ESSA plan. This 'Every Student Succeeds Act' plan will allow Oregon to judge schools partially on a 'freshman on track' idea which would show how many students complete six credits by sophomore year. DeVos says that passing classes in freshman year is extremely important for graduating on time. She congradulates Oregon on the 'significant accomplishment', and she is very pleased to approve Oregon's ESSA plan.