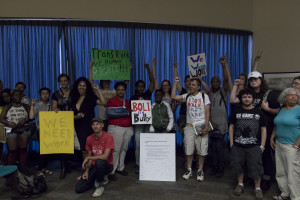 Portland will be having a Rally Against Transgender Employment Discrimination on Thursday. It will be held at eight-hundred North East Oregon Street at the State of Oregon building, off of Lloyd boulevard. Currently, the Oregon Bureau of Labor and Industries does not advocate effectively for Transgender workers, or offer them equal protection. According to PDXactivist.org, the rally is demanding equal treatment in hiring, retention and promotion for transgendered peoples, in addition to establishing training for potential employers.  All are welcome to attend, to show support and solidarity.

US Officials estimated that the country suffered over two-hundred and sixty-billion dollars in flood-related damages between nineteen-eighty and two-thousand-thirteen; and an executive order signed by President Obama aimed at helping that, by requiring that builders factor in scientific projections for severe storms and increased flooding. But it is reported that President Donald Trump just signed a new executive order, effectively revoking that law. Trump has been a large proponent of deregulation, and feels the order will remove flood risk restrictions for federally funded infrastructure projects. This would allow developers to cut through red tape, and provide more freedom to build on floodplains meant to hold water during downpours and high currents.  And Trump stated, quote, “It’s going to be quick… and by the way, if it doesn’t meet environmental standards, we’re going to approve it. Very simple.”

Today, the people of Sierra Leone have started burying hundreds of victims from the mudslide that wiped out the homes on the edge of the country’s capital, Freetown.  It’s been reported that over three-hundred are confirmed dead and at least six-hundred people are still missing since the disaster.  Aid workers claim there is a high threat of disease due to the dead bodies lying out in heat.  With one of Africa’s worst flood-induced disasters in recent memory, Sierra Leone’s government is pleading for international help.