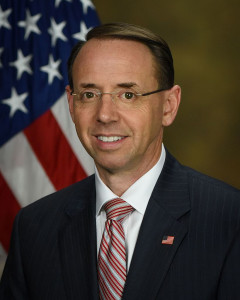 They’re concerned about a Department of Justice budget that shifts priorities from civil rights enforcement, toward a renewed War on Drugs and greater incarceration.

The groups, which include the Leadership Conference on Civil and Human Rights, the NAACP Legal Defense and Education Fund, the ACLU, and the Drug Policy Alliance, are calling on members of Congress to push Rosenstein on the department’s budget priorities.

We hear now from Vanita Gupta, who headed up the Justice Department’s civil rights division in the Obama administration. She’s now the President and CEO of the Leadership Conference.

That was Vanita Gupta, former head of the civil rights division at the Justice Department, now head of the Leadership Conference for Civil and Human Rights; she was followed by Michael Collins, Deputy Director of the Drug Policy Alliance.

Update Required To play the media you will need to either update your browser to a recent version or update your Flash plugin.
Download audio file
Topic tags:
Drugs, Economy, Government/Politics