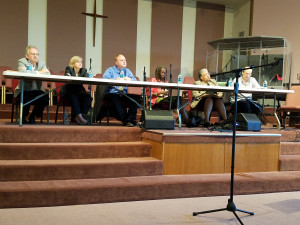 Last night, June 14, 2017, community stakeholders met at Maranatha Church in NE Portland for a forum on the Outcomes Report issued by the Compliance Officer/Community Liaison (COCL). The report, available here, is the third of its kind since a settlement was reached between the City of Portland and the US Dept. of Justice, after the DoJ found that PPB showed "pattern and practice" of using excessive force against people having mental health crises.

Last year, the second Compliance Report was released by the COCL alongside the Community Oversight Advisory Board (COAB)--a citizen group tasked by the settlement with overseeing the course of reforms. It disbanded earlier this year. The Compliance Report details whether or not, in the eyes of city-hired investigators, the PPB is trying to bring itself into line with the settlement. It requires a public meeting to review its contents according to the settlement. The Outcomes Report just released, on the other hand, looks at the effects of the PPB's compliance or lack thereof, and does not require a public forum.

Since the dissolution of the COAB, community stakeholders and a federal judge have demanded that the COAB or some equivalent community oversight body be formed. In lieu of that, the city-hired firm conducting the assessment, Chicago-based Rosenbaum & Associates, agreed to last night's forum at the request of groups like the Albina Ministerial Alliance, Portland Copwatch and SURJ-Showing Up for Racial Justice. Many of these groups' issues with the Outcomes Report--too much speculation, a bias against protesters, overreliance on police data, inadequate community polling--are outlined in detail in a report by Portland Copwatch.

Despite the frayed relations between the City, community, PPB, the DOJ, and the COCL--palpable in the full audio of the event--the forum was sparsely attended. Twenty minutes into the forum there were 29 people clustered in vast Maranatha Church, seven of them onstage. Two of the attendees were KBOO volunteer reporters, the only media present.