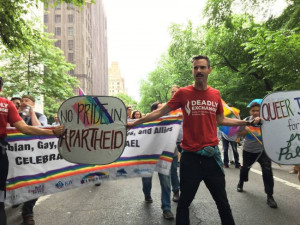 "The Celebrate Israel parade has long been a contentious display of Israel’s grip on NYC politicians, its militarization of the NYPD, and its driving role in perpetuating Islamophobia  – and last weekend New Yorkers took our objections to the streets. Now, queer Jewish protesters are being accused of being “homophobic” because they disrupted the LGBT contingent. If that accusation is confusing, it’s because of the pretzel logic required to cast being pro-Israel as being pro-rights."

Tonight we're speaking with Craig Willse, one of the participants who sought to turn a 'simple' propaganda exercise that celebrated an apartheid state, into an opportunity for engagement on Palestinian rights, as well as the way Israel uses gay men and lesbians to shield their society from criticism about human rights abuses (know as Pinkwashing).

Craig Willse is a Brooklyn-based writer and teacher. He is the author of The Value of Homelessness: Managing Surplus Life in the United States (University of Minnesota Press, 2015). Craig is a member of Jewish Voice for Peace and on the organizing collective of the US Campaign for the Academic and Cultural Boycott of Israel.

In the second half of the hour: Portland's Trans Pride March is this Saturday! Trans Pride is organized by Greater Portland Trans Unity, and we'll be joined on the air by Leo Soell, a member of the 2017 Trans Pride March Planning Committee,and Phyllicia Daria McGowan, who has been part of GPTU and helped to plan the march since 2015.

Update Required To play the media you will need to either update your browser to a recent version or update your Flash plugin.
Download audio file
Topic tags:
Activism, Civil Rights/Human Rights, LGBTQ, War/Peace