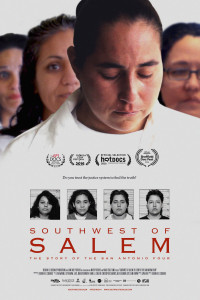 In 1994, four women in San Antonio, Texas, were arrested and charged with heinous crimes. The women -- working class Latina lesbians -- were accused of raping two young girls, They were tried, convicted in 1997, and sentenced to decades in state prison.

Just one problem: They were innocent. The accusations were false, the charges had been made up. They were railroaded.

The #SA4 finally won their release in 2013, then finally, in November of 2016, they were officially exonerated. Their story has been turned into an award-winning documentary, Southwest of Salem.

Two of the San Antonio Four, Anna Vasquez and Cassandra Rivera, visited Oregon recently to support the Oregon Innocence Project. KBOO reporter Doug McVay met with them and brings you their story.