30 Years of ACT UP; and Art by Tarts: a sex worker art show. 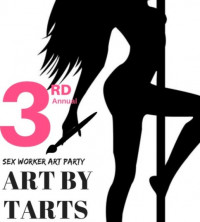 Solidarity: global and local; past and present. How do we organize to confront a crisis? We'll be talking with folks who have answered the call for community-and-activism on issues of sexuality, safety, health, and well-being.

In the first half of the hour, we'll be talking with Bob Lederer and Luis Santiago, two long-time organizers with ACT UP's (AIDS Coalition to Unleash Power)'s founding New York chapter. Bob was active in the late 80s and 90s, and Luis is a longtime member involved in the Latina/Latina Caucus of the 90s and still active today.

This conference will focus on some of the often-ignored campaigns and victories throughout three decades of life-saving direct actions to end AIDS by ACT UP/NY and its coalition allies, particularly (but not only) campaigns on HIV/AIDS issues focused on women, people of color, drug users, young people, and the Global South.

Bob Lederer was an organizer with ACT UP/New York, the AIDS Coalition to Unleash Power, from 1988 to 2000. He helped organize campaigns to transform AIDS research, fund needle exchange programs, and expand treatment access to the Global South. He is also a longtime print journalist and the co-host of “Health Action” on Pacifica radio station WBAI in New York City.

Luis Santiago was a member of ACT UP New York’s Latino Caucus from 1990 to 1996, addressing issues related to the epidemic in that community. In 1998 he joined the Board of Directors of the AIDS Vaccine Advocacy Coalition (AVAC). Since his return to ACT UP in 2013, he has focused on expanding access to PrEP (Pre-Exposure Prophylaxis) and helping plan the elimination of hepatitis C in New York.​

In the second half of the hour:

Local organizations Stroll and SWOC are putting on an art show featuring the art of local and international sex workers. Members of SWOC and Stroll will be on later to discuss to discuss the difficulties of organising as a marginalised group, and how awesome the art show is going to be. Long-time listeners of Preference Radio will be familiar with Red and Kat, who most recently joined us on the air to discuss Sarah Schulman's most recent book, Conflict is Not Abuse.

Stroll, with support from the Sex Workers Outreach Coalition, is delighted to announce Art By Tarts: the 3rd annual Sex Worker Art Party, Thursday June 15th, from 6-9pm, in PCC Cascade’s Student Union. Each year Stroll hosts the Sex Worker Art Party to de-mystify, humanise, and show off the multi-faceted, diamond-hard brilliance of the sex worker community. This year, hosted by PCC Cascade, we’re featuring artists from Australia to the United States, including Jacq the Stripper, stripster comedian Chase Paradise, and Atlanta star Fannie Mae. There will be an hour of performances between time to mingle with artists, look at the art, and talk to the artists.

Art By Tarts shows off our diverse skill sets and brilliance while raising funds that go directly to sex workers themselves--through buying the art of individual artists to donating to Stroll to support the outreach work we do. While Jacq the Stripper is the most famous artist participating this year, participants include Clara, a miniaturist who has replicated in tiny and perfect detail the interior of the clubs where she spent much of her life; Fannie Mae, whose work reveals candid intimate moments caught between southern queer people of colour living their organic beautiful truths; Mikki Mischief’s deceptively simple cartoon series protesting state abuses against sex workers; other artists include Arabella de Lioncourt, Opera by Skream PDX, Misha Lake, Catalina Salas, and more!
Stroll is a harm reduction, outreach, and education group by and for sex workers. Since its beginning as the zine Working It, Stroll has expanded to offer street outreach, popup free clothing parties, and offering meals to houseless people in the Portland area. To learn more, visit Stroll-PDX.org