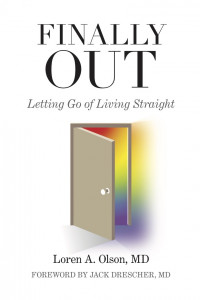 A Psychiatrist's Own Story

On this edition of Radiozine Dan Johnson talks to Dr. Loren Olson author of Finally Out.

Dr. Loren A. Olson has frequently been asked two questions: How could you not know that you were gay until the age of forty? Wasn't your marriage just a sham to protect yourself at your wife's expense? In Finally Out, Dr. Olson vigorously answers both questions by telling the inspiring story of his evolving sexuality, into which he intelligently weaves psychological concepts and gay history. This book is an exploration of human sexuality, particularly the sexuality of mature men who, like Dr. Olson, lived a large part of their lives as straight men - sometimes long after becoming aware of their same-sex attractions.

Olson, a psychiatrist and father of two who came out at 40, begins his first effort by answering a question: "How could you not know you were gay until you were 40?" He relates years of feeling like an outsider, and not quite masculine enough, and explores the cultural and personal barriers that kept him from self-discovery.

Less a handbook for coming out late in life than one man's story of doing so, Olson's always-compassionate voice asserts the importance of being true to oneself. The complexity of applying the label "gay" is a central thread, and the focus is on older men, though not exclusively--this could be of use to men of any age struggling with sexual identity.

Bolstered by his expertise as a psychiatrist, Olson capably explores issues of self-image, identity, self-esteem, and depression, as well as history, culture, morality, law, and religion in relation to homosexuality. Olson's own story is compelling, but as a writer he better handles the less-personal material. But ultimately Olson's book is engaging, and helpful in illuminating the coming-out processes.

Update Required To play the media you will need to either update your browser to a recent version or update your Flash plugin.
Download audio file
Topic tags:
Civil Rights/Human Rights, Family, Gender, LGBTQ, Sexuality