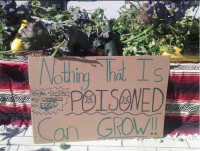 In 2012 a massive fire ripped through the Chevron Richmond Refinery, sending a towering plume of toxic smoke into the air over Richmond, California.  For over a hundred years, Richmond was a classic company town, whose politics, economy and environment were defined by Chevron and the pollution spewing from the refinery, which caught fire every few years. But as a result of a decade of grassroots organizing, the 2012 fire kindled a new resistance to Chevron's business as usual. The city has transformed itself from a beaten-down company town to a place where timely, relevant and reproducible public policies have revitalized the city.

On this episode of Locus Focus we talk with Steve Early, whose new book REFINERY TOWN: Big Oil, Big Money and the Remaking of an American City, traces the community organizing and initiatives that are turning Richmond into one of the greenest and most progressive cities in America.

Steve Early has worked as a journalist, lawyer, labor organizer or union representative for the past forty-five years. He is the author of three other books and lives in Richmond, California.

You can hear Steve speak on Sunday, March 19 at 7 pm in the Elliot Chapel, First Unitarian-Universalist Church, SW Twelfth and SW Salmon, in downtown Portland. Enter off Twelfth.

He will also be talking and signing books at the Portland State University Bookstore, Urban Center Plaza, 1715 SW 5th Ave, Portland, on Monday, March 20 at 7 pm.

Update Required To play the media you will need to either update your browser to a recent version or update your Flash plugin.
Download audio file
Topic tags:
Activism, Community Building, Energy/Natural Resources, Environment/Climate, Economy