45 Days of Madness (and Counting) 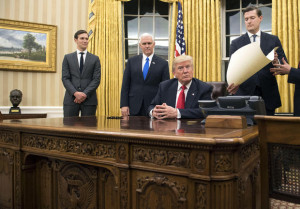 It's been a rocky and rolling six weeks since we talked with George Polisner, a former senior executive at Oracle who very publicly resigned from the company after its CEO enthusiastically joined the Trump transition team in January. Since quitting Oracle George has devoted his time to building the Resistance movement to stop Trump. On this episode of Locus Focus we check back with George to talk about the state of the movement, after weeks of massive protests and rowdy town hall meetings with members of congress around the country. We'll get his take on how the ongoing onslaught of scandals plaguing the Trump administration can be harnessed to bring down this unprecedented and terrifying presidency.

You can join George Polisner's network of activists here: https://civ.works

Update Required To play the media you will need to either update your browser to a recent version or update your Flash plugin.
Download audio file
Topic tags:
Activism, Energy/Natural Resources, Environment/Climate, Government/Politics