Famine Looms in Parts of Africa and Yemen 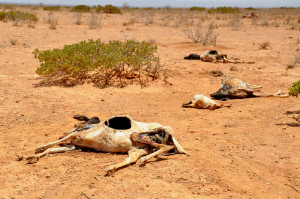 Famine Looms in Parts of Africa and Yemen

Famines are looming over several dry and war-torn areas in North Africa and the Middle East. The United Nations officially declared a famine in South Sudan last week, and is on the verge of declaring famines in Yemen, Somalia and northeastern Nigeria as well.

While low rainfall in eastern Africa and the Middle East is undoubtedly a crisis in its own right, the situation is exacerbated in all four areas by ongoing armed conflicts. In Yemen, the poorest country in the Arab world, many of its eighteen-million people are in rebel-controlled territory and subject to frequent air raids from a Saudi-led coalition. Food does not make it in easily, if at all.

The causes of the crisis are more complicated than any one thing, however, and local governments and aid organizations are scrambling to raise funds and awareness to avert a catastrophe. Portland-based NGO Mercy Corps works with local organizations in Somalia and the larger region to deliver food and medical aid and work for economic development.

For more on how they and other aid organizations are responding to the unfolding crisis, KBOO reporter Sam Bouman spoke with Mercy Corps’ senior communications director, Lynn Hector.