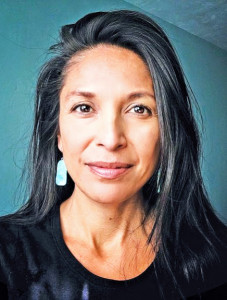 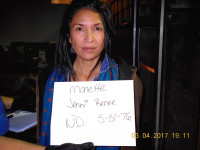 "The morning after I was bonded out of the Morton County jail, I took to Twitter and posted a detail that I only could have known from actually being on the inside.

“#MniWiconi is inscribed everywhere,” I tweeted. And it’s true.

The signature slogan of the movement to try and stop the controversial Dakota Access Pipeline has been scrawled, carved and etched throughout the jail — on cinderblock walls, paint-chipped tabletops, cold metal doors. In Lakota, it loosely translates to “Water is Life.”

Since August, hundreds of protesters, known as water protectors, have passed through those cellblocks as a form of punishment for their unwavering commitment to protect the Missouri River from a potential oil spill. According to the Morton County Sheriff’s Department, it has processed a total of 696 protest-related arrests. On Wednesday, February 1, I became one of them. "

Jenni Monet is a freelance journalist who travels and writes about Indigenous People's around the world.  Her journeys have taken her to more than 60 countries.
She's recently been embedded at Standing Rock where thousands have gathered to try and stop the Dakota Access pipeline. Jenni grew up on or near Indian reservations in the greater Southwest and is a member of the Laguna Pueblo, a tribal nation in New Mexico.  She's been based in Brooklyn, NY since 2002 and studied journalism at Columbia University where she earned an MA in International Politics with a concentration in Indigenous Human Rights Policy. She also advocates on behalf of tribal radio stations as a board member of the National Federation of Community Broadcasters.