The Largest Methanol Refinery in the World 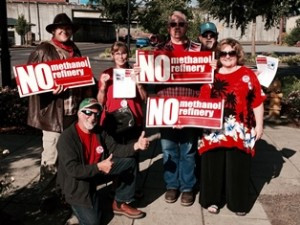 As this year draws to a painful close, amidst all the political debris, we can look back at some major environmental successes. Communities across the Pacific Northwest have stopped proposals to build coal terminals in Washington and Oregon, a giant methanol refinery in Tacoma. LNG export terminals in the Columbia River estuary and hopefully Coos Bay. The Northern Gateway pipeline slated to carry tar sands oil across northern British Columbia was terminated by Justin Trudeau's new national government in Canada. And the Portland City Council passed an ordinance banning all future fossil fuel export facilities in the city. Yet there is still a lot of work ahead to hold the Northwest's Thin Green Line of resistance against fossil fuel development.

On this episode of Locus Focus we talk with Jasmine Zimmer-Stucky, senior organizer with Columbia Riverkeeper, and Kalama activist Gary Wallace, about one of the remaining gargantuan fossil fuel projects being fought in Kalama, Washington. Northwest Innovation Works wants to build the world's largest methanol refinery on the banks of the Columbia River, that would convert natural gas to methanol for export to China to produce plastics. Like all the other mega fossil fuel projects being proposed across the region, the Kalama refinery is being met with fierce opposition from community members. We'll talk with Jasmine and a Kalama community organizer about why so many people around Kalama do not believe that a methanol refinery would benefit their community in any way.

Jasmine Zimmer-Stucky's role with Columbia Riverkeeper is to inform and engage residents in Oregon and Washington on coal export and oil terminals that would transform the scenic Columbia River Gorge into a dirty energy corridor. Jasmine led the public campaigns to stop would-be coal export terminals from polluting Oregon’s air and water and now focuses on doing the same in Southwest Washington.

Gary Wallace is a longtime Kalama resident who has been leading the resistance to local fossil fuel projects in the Kalama-Kelso-Longview, Washington area.