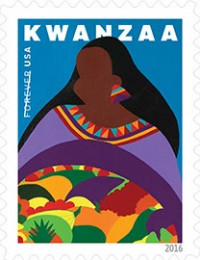 The US Postal Service issued a Kwanzaa Forever stamp this year. The artist, Synthia Saint James, created the original Kwanzaa stamp in 1997.

The colorful stamp art features a young African-American woman as the embodiment of Africa. She wears a lavender dress with a collar of African design that also appears in her earring. In front of the woman sits a large purple bowl. It overflows with fruits and vegetables, symbolizing the abundance of African first harvest celebrations.

A professional artist for more than 45 years, Saint James has illustrated and/or authored 17 children’s books.   She created the original cover art for Terry McMillan’s novel Waiting to Exhale.    Her work has been exhibited internationally and has appeared in several United States embassies around the world.  She has worked with clients such as Barnes and Noble, Maybelline, UNICEF, Essence magazine, and The Coca-Cola Company, among others.

Kwanzaa is an annual non-religious holiday, which takes place over seven days from December 26 to January 1.  Created in 1966, Kwanzaa draws on African traditions, deriving its name from the phrase “first fruits” in Swahili, a widely spoken African language. It has its origins in first harvest celebrations that occurred across the African continent in ancient and modern times. Kwanzaa synthesizes and reinvents these tribal traditions as a contemporary celebration of African-American culture.African Americans. December 26, 2016, marks the 50th anniversary of this widely celebrated holiday.

Update Required To play the media you will need to either update your browser to a recent version or update your Flash plugin.
Download audio file
Topic tags:
African American, Arts/Culture, Fiction