Brian Castner on "All the Ways We Kill and Die" 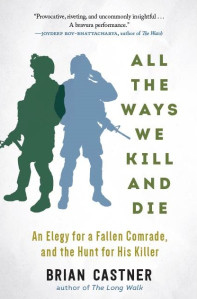 Brian Castner on "All the Ways We Kill and Die"

Host Jim Schumock speaks with non-fiction writer and memoirist Brian Castner, author of All the Ways We Kill and Die: An Elegy for a Fallen Comrade and the Hunt for His Killer and the memoir, The Long Walk: A Story of War and the Life That Follows.

Brian Castner is a nonfiction writer, former Explosive Ordnance Disposal officer, and veteran of the Iraq War. He is the bestselling author of All the Ways We Kill and Die, and the war memoir The Long Walk, which was adapted into an opera and named an Amazon Best Book for 2012. A contributing writer to VICE, his work has also appeared in the New York Times, Washington Post, Wired, Foreign Policy, Outside, Buzzfeed, Boston Globe, Time, The Daily Beast, the Los Angeles Review of Books, and onNational Public Radio. He has twice received grants from the Pulitzer Center on Crisis Reporting, to cover the Ebola outbreak in Liberia in 2014, and to paddle the 1200 mile Mackenzie River to the Arctic Ocean in 2016. His next project, a co-edited collection of short stories, is titled The Road Ahead, and will be published in January.

Update Required To play the media you will need to either update your browser to a recent version or update your Flash plugin.
Download audio file
Topic tags:
War/Peace, Arts/Culture, Military/Veterans

END_OF_DOCUMENT_TOKEN_TO_BE_REPLACED

Words and Pictures
Jan Eliot - from the Archive