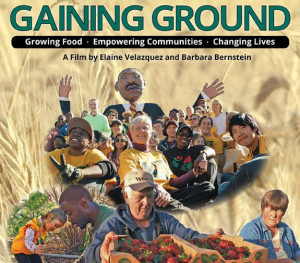 GAINING GROUND is a feature-length documentary film that tells personal stories of farmers making extraordinary changes in their farming practices to feed their local communities sustainably grown produce and grains. You're looking at urban farmer-activists in inner city Richmond, California, a small family farm in rural Oregon converting from commodity dairy to chemical-free produce and a large farm in the Willamette Valley transitioning from grass seed to organic grains.

The film personalizes class, gender, race and environmental justice issues by rooting them within narratives of compelling individuals. As these stories unfold, the film explores the devastating effects of the 2012 Chevron Richmond refinery fire on Urban Tilth in inner city Richmond and the impact of the 2013 discovery of GMO wheat in Eastern Oregon on Stalford Seed Farms in the Willamette Valley. While the movie is sober about the obstacles to creating change, at the same time it points the way toward hope. GAINING GROUND instills in its viewers the potential to create change on a personal, local and global scale. GAINING GROUND will be broadcast on public television, screened in theaters and film festivals around the country, streamed on the internet and released on DVD and Blu-ray disc for the home market.

Join the filmmakers and many Oregon people in the film for a screening at The Hollywood Theatre:

Update Required To play the media you will need to either update your browser to a recent version or update your Flash plugin.
Download audio file
File(s):