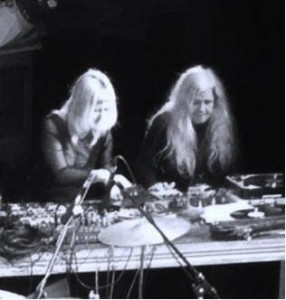 Tonight, we're honored to be joined by The Marta Zapparoli & Jackie Stewart Duo, who will perform live in KBOO Studios.

Marta Zapparoli:
Born in 1975, She is an Italian experimental sound artist, improviser, performer, and musician. She works and lives in Berlin since 2007. Her music mainly consists in sonic pieces that she builds using a wide variety of the recordings captured from the real sound world , using devices and self-made microphones with out borders and in many unconventional ways. She is interested on the boundaries and relations between real sound world ,vibration sound, noise pollution, and inaudible sound.

Jackie Stewart:
Jackie “Oblivia” Stewart started performing sound in 1979 in Portland, Oregon. Groups Jackie has performed in include “the improvs” (1979), “Spy vs. Spy” (1980), “Babylon 2000” (1981-83), and “Smegma” (1982-present). Though Stewart experimented on guitar and very much enjoys vocals, she has found her focus with turntables. Her visual art medium is assemblage or collage, so it comes naturally to Jackie to assemble sounds. She enjoys hearing how beautiful or humorous “mixing” can be, in the same way things come together visually when assembling her cut-up art pieces.  With Smegma she says “I can enjoy a freedom of expression, totally unrestricted and of my own: as in I choose to interpret what my part will sound like. It has enabled me to learn much about recording and live performance.” Jackie’s sounds have appeared on dozens of releases, both solo and in group formats, in addition to her work with video.

Update Required To play the media you will need to either update your browser to a recent version or update your Flash plugin.
Topic tags:
Music
Genre(s):
Eclectic, Electronic, Experimental, Live Performance