TRIBES TAKE ON THE FOSSIL FUEL INDUSTRY IN THE GORGE 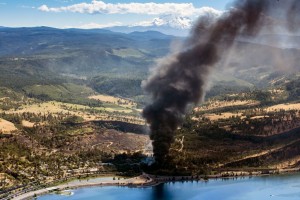 In the struggle to prevent the Pacific Northwest from becoming an export hub for fossil fuels, Native American tribes have played a vanguard role in taking on the fossil fuel industry. On this episode of Locus Focus we'll look at how the tribes are an inspiration to everyone who has joined the campaign to stop oil, coal and LNG terminals, pipelines and trains from wreaking havoc on the culture, community and environment of our region. We talk with Paul Lumley, executive director of the Columbia River Intertribal Fish Commission, about why this struggle is of particular urgency to all the tribes in the Northwest.

Babtist “Paul” Lumley has an extensive history working with Northwest tribes on salmon issues, particularly in the Columbia River Basin. He spent 17 years with CRITFC working on biological issues relating to US v. Oregon and the Pacific Northwest Electric Power Planning and Conservation Act and assisted in fund raising and establishing a grant program for the four Columbia River treaty tribes.

Update Required To play the media you will need to either update your browser to a recent version or update your Flash plugin.
Download audio file
Topic tags:
Environment/Climate, Energy/Natural Resources, Indigenous