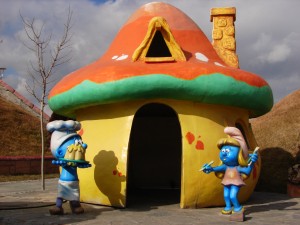 Joe Clement reviews Finance Smurf, the last of the original Smurf comics written by Pierre Gulliford (aka "Peyo"). Finance Smurf, written in 1992, is a sharp indictment of money, and shows the smurfs' world turned upside down when one of the smurfs institutes a human-like economy based on money and working for it. Some smurfs accumulate wealth, most smurfs become poor, no one eats who cannot pay, and everyday life becomes an alienating and exhausting struggle. You can find Finance Smurf and all the smurf comics at the Multnomah County Library

Update Required To play the media you will need to either update your browser to a recent version or update your Flash plugin.
Download audio file
Topic tags:
Youth, Economy, Humor, Labor, Fiction, Education