THE QUADRAPHONNES host The Outside World this Friday night! 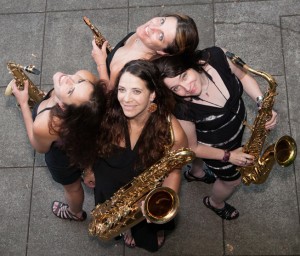 The following is an IMPORTANT MESSAGE from your local Quadraphonne council :

Join us on KBOO from midnight on Friday, April 22 to 3am Saturday, April 23 for three hours of music and information on upcoming shows! First, the Quadraphonnes will be performing live in the KBOO studio offering a sneak preview of their upcoming show at Turn, Turn, Turn on Sunday, April 24. This all-female sax quartet will be performing original music by Portland-based composer, Andrew Durkin AND spinning tracks from some of their favorite local artists and inspirations.

Then, we'll hear about the "BANDS FOR BERNIE: Rock the Registration" concert --6:00 pm til midnight on Monday April 25 at The Hallowed Halls (4420 SE 64th Ave, by FOSTER and HOLGATE in Portland), featuring local bands, Brownish Black, And, And, And, Rio Grands, Rick Bain and the Genius Position, The Reverberations, Silver Ships and The Hustle Shoals. The Hustle Shoals as well as Michael David of Brownish Black will be performing some songs live in the studio, spinning records and giving all the important info. about the Bands for Bernie concert and voter registration event.