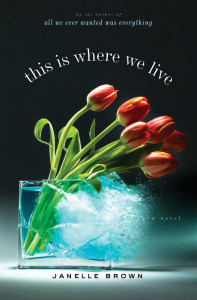 Author Janelle Brown on her novel "This Is Where We Live"

Host Ed Goldberg interviews Janelle Brown, author of "This is Where We Live," a novel about a couple in L.A. whose life falls apart in the economic bust. They suffer a crushing blow to their dreams of the bohemian life and their professional aspirations. As a result they question their values and their shared vision of the future.

Janelle Brown'a debut novel, "All We Ever Wanted Was Everything," was a national best-seller and named one of the best books of 2008 by Library Journal. A novelist, essayist and journalist, her writing appears regularly in The New York Times, Vogue, Elle, Wired, Self, The Los Angeles Times, and numerous other publications. Previously, she spent five years as a senior writer at Salon, covering a diverse range of subjects -- from Internet culture to the war on drugs, pop culture to style, public policy issues and the digital music movement-- and began her career as a staff writer at Wired, working on seminal Web sites like HotWired and Wired News during the heydey of the dotcom boom. In the 1990’s, she was also the editor and co-founder of Maxi, an irreverent (and now, long-gone) women's pop culture magazine.