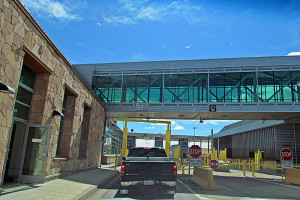 Part of KBOO's investigative series on ALEC influence in Oregon

The fifth piece looks at three of ALEC’s task forces; Civil Justice, Public Safety and Elections, and the Justice Performance Project and how together, these task forces have compelled ALEC supporters in the Oregon legislature to introduce several immigration related model bills.  And although most of them failed, staunch conservatives continue to push them through reintroduction.  The model, which supports commercial prisons like Wackenhut aka the Geo Group, Corrections Corporation of America (CCA) and Management Training Group.  (MTG) depends on tedious, ALEC inspired laws that trap the undocumented and funnel them to commercial prisons which collect hundreds of dollars per head per day

The full transcript is here: http://smartalec.kboo.fm/?page_id=156

(this page has a dupe - https://kboo.fm/media/16576-smart-alec-oregon-immigration-and-detention)

By now, you know what ALEC is and what it stands for.  And you know it  has committees called task forces that bring together corporate representatives and  legislators in such a way that the former offer the latter model bills  to introduce in state legislatures.  These bills tend to greatly favor corporate interests.