Novelist Mary Roninette Kowal on her regency fantasy: "Shades of Milk and Honey" 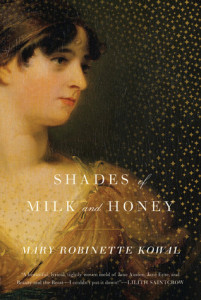 In 2008 Mary Robinette Kowal received the Campbell Award for Best New Writer.  She was a 2009 Hugo nominee for her story “Evil Robot Monkey.” Her stories have appeared in Strange Horizons, Asimov’s, and several Year’s Best anthologies as well as her short story collection Scenting the Dark and Other Stories from Subterranean Press.

Mary, a professional puppeteer and voice actor, has performed for LazyTown (CBS), the Center for Puppetry Arts, Jim Henson Pictures and founded N. Her designs have garnered two UNIMA-USA Citations of Excellence, the highest award an American puppeteer can achieve. She also records fiction for authors such as Kage Baker, Cory Doctorow and John Scalzi.

She is the Vice President of Science Fiction and Fantasy Writers of America. Mary lives in Portland, OR with her husband Rob and over a dozen manual typewriters.