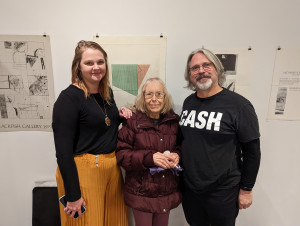 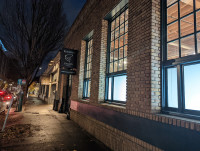 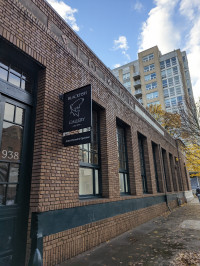 On Tuesday, November 29, 2022, Joseph Gallivan interviews Blackfish Gallery artists Alice Christine Walker, Barbara Black and Christopher Shotola-Hardt [PRONOUNCED SHAD-OLA HART] about Blackfish’s new space at Northwest Nonth and Flanders. The artist owners talk about the last 36 years of the Blackfish cooperative on Northwest Ninth Avenue, how they will use their new, bigger space in the Otis Elevator building, and give a preview of December’s opening show, “Past is Prologue.”

This interview was recorded on November 27, 2022 on a H2n Zoom handheld recorder and engineered by KBOO volunteer Ray Bodwell. https://kboo.fm/blog/55224

We hope to see you all at our new space starting this December 2022! In a narrative arc made for the history books, the first show in the new gallery features one of the collective's founding members, painter Barbara Black, who puts the “Black” in Blackfish. Her invited guests, fellow painter Angela Passelacqua and mixed media sculptor Barbara Conyne, are longtime colleagues and friends for over 40 years. Their exhibition is aptly titled “What’s Past is Prologue.” It runs from November 29 to December 31, with an opening reception on First Thursday, December 1, from 6-9pm. We look forward to welcoming you to the new Blackfish Gallery then (938 NW Everett Street, just a couple blocks from our current home!

KBOO Radio is a volunteer-run nonprofit, and it needs your money if you are listening.

Show your support for Art Focus and for KBOO by becoming a KBOO member today. Help us meet our $70,000 End of Year Membership Drive
goal. We’re community funded so we need your support to get there. Just go to kboo.fm/give or text K-B-O-O
to this number: 44-321.

Joseph Gallivan has been a reporter since 1990. He has covered music for the London Independent, Technology for the New York Post, and arts and culture for the Portland Tribune, where he is currently a Feature Writer. He is the author of two novels, "Oi, Ref!" and "England All Over" which are available on Amazon.com