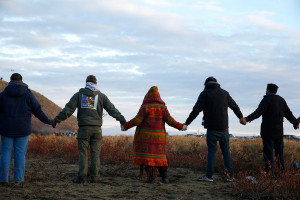 Native peoples have used the tool of fire as medicine. Fire was understood to be a spirit, a healer and sacred in its own right. Traditional Native controlled burning, called cultural fire, utilizes ancient agro-forestry practices, technology developed through time by the Karuk tribe and Indigenous Peoples around the world.

With global climate heating turning the West Coast of the US into an arid tinderbox, this has been another year of the megafire. Thus, the cultural fire practice of Elizabeth Azzuz on the North Coast of California sets an important example on how to protect and regenerate forests for the people and wildlife who call them home using traditional ecological knowledge.

Elizabeth Azzuz is a cultural fire practitioner. She gathers and propagates traditional food and medicinal plants. Of Yurok and Karuk descent, she comes from and lives in her traditional territory where the Trinity River flows into the Klamath on the North Coast of California. Elizabeth is a mother and grandmother; at the age of 4 she learned about burning from her grandfather.

Update Required To play the media you will need to either update your browser to a recent version or update your Flash plugin.
Download audio file
Topic tags:
Energy/Natural Resources, Environment/Climate, Faith/Religion/Spirituality, Indigenous