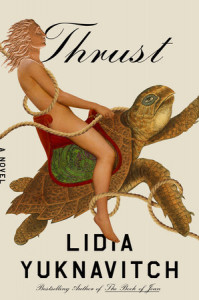 On today's episode, we welcome Lidia Yuknavitch, author of the new novel Thrust from Riverhead Books. Lidia’s the nationally bestselling author of the novels The Book of Joan, The Small Backs of Children, and Dora: A Headcase, the memoir The Chronology of Water, and the non-fiction book The Misfit’s Manifesto. She’s received two Oregon Book Awards and was a finalist for the Brooklyn Public Library Literary Prize and the PEN Center USA Creative Nonfiction Award. Her TED Talk – “The Beauty of Being a Misfit” – currently has over 4 million views.

Thrust has been receiving rave reviews, and deservedly so. Rebecca Makkai calls the book “alarmingly trenchant—and a hell of a wild ride. Daring, dazzling, and earth-splitting, this is a book to take in wide-eyed.”

Michele Filgate, in the Los Angeles Times, writes: “Thrust is the culmination of everything she has been writing toward, a blistering excoriation of power structures that also honors the resilience of those who fight back.”

And Ron Charles in the Washington Post says Thrust is “the most mind-blowing book about America I’ve ever inhaled.”

Lidia, in her own words, calls herself “an artist emerged from the petri dish of Portland, Oregon”. And we’re fortunate to have her here.